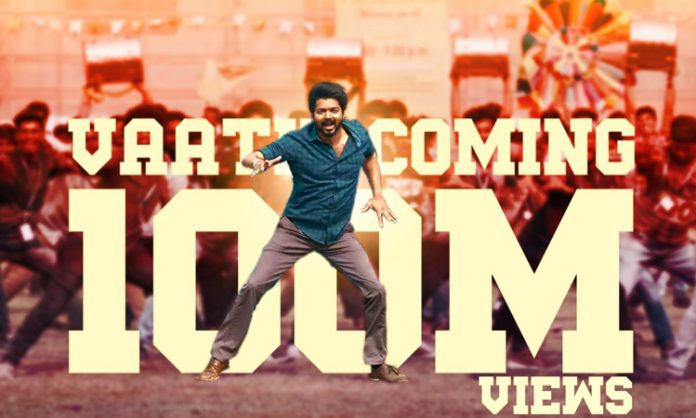 ‘Master’ is the Tamil blockbuster starring Vijay and Vijay Sethupathi, produced by ‘XB Film Creators’ and directed by Lokesh Kanagaraj. The film was released on Pongal 2021 and created records in collection, emerging as the first Indian film to reach No. 1 in the global box office, on release.

Young composer Anirudh Ravichander was the Music director of the movie and under his composition; all the songs were super hits. Especially the single, ‘Vaathi Coming’ written by Gana Balachandar and sung by the Lyricist and the Composer, has become very popular. The beautiful music and the attractive dance of the song made everybody to enjoy, crossing the language barriers.

The song has crossed 100 million views on YouTube now, at par with the earlier songs ‘Aalapporaan Thmizhan’, ‘Verithanam’ and ‘En Jeevan’ of the actor’s earlier movies, ‘Mersal, ‘Bigil’ and ‘Theri’. ‘Vaathi Coming’ has achieved this within almost two months and it is a credit to Vijay that mostly the songs of his movies are breaking the barriers like this.