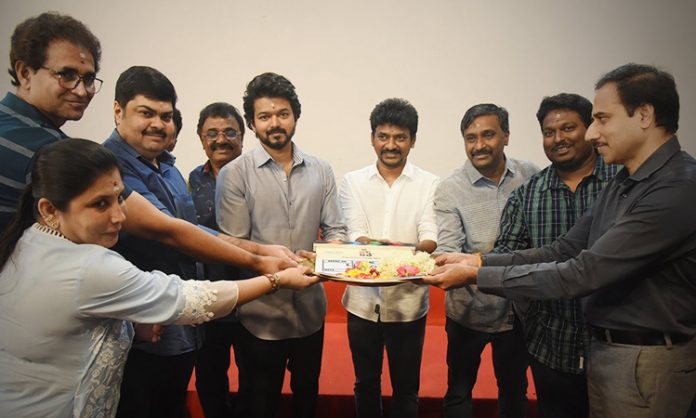 Vijay’s next movie, ‘Thlapathy 65’, produced by the ‘Sun Pictures’ and directed by Nelson Dilipkumrar, has started the shoots with the auspicious Pooja, on Wednesday, 31st March.

After the release of ‘Master’, Vijay joined with another young director, Nelson Dilipkumar, who directed Nayanthara’s ‘Kolamavu Kohila’ and ‘Doctor’ with Sivakarthikeyan.

Composer Anirudh and cinematographer Manoj Paramahamsa are the main crew members and Pooja Hegde is in the cast, playing the lead opposite Vijay.

And the untitled movie, ‘Thalapathy 65’ was on the floors, on Wednesday, with the traditional Pooja, at Chennai. The producers, ‘Sun Pictures’ have shared the snaps of Vijay and the team at the Pooja ceremony, in their official twitter page. The fans are very excited of the start of the movie and the photos of Vijay at the ceremony are going viral in the media.

It is said that the shoots will go on, only for a couple of days, and will be in full swing, after the elections. And it is planned to be shot in Chennai, Hyderabad and also in Europe and set for a release for next year Pongal.