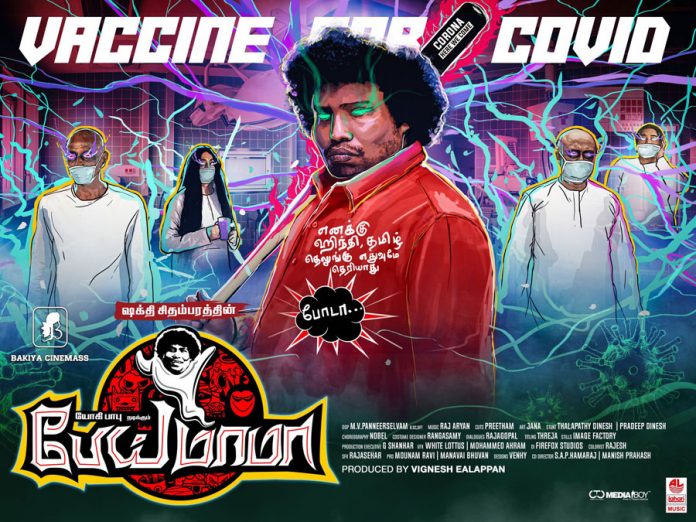 Comedian Yogi Babu is the busy actor in Kollywood and he is working in many projects like Kadaisi Vivasayi, Mandela, Vellai Yaanai, Kanni Raasi and Nindru Kolvaan which are in the filming stage. He also played lead role in Dharmaprabu and Gurkha. Now he has done lead in the movie Pei Mama which is under post production work. This horror comedy film is directed by Sakthi Chidambaram and is produced by Bagiya Cinemas. Camera works are done by Panneerselvam and music composed by Raj Aryan.

Pei Mama was planned with actor Vadivelu in the lead role but because of various reasons the movie took off with Yogi Babu as the lead. The shoot of the movie took place in Kumily. Other cast members like Nan Kadavul Rajendaran, Vaiyapuri and Imman Annachi are playing key roles in the movie.

Recently the first look of the movie was released by the actor Vijay Sethupathi. The first look received great response and it went viral. In the first look poster Yogi Babu is wearing a red shirt with the slogan”Enakku Hindi, Tamil, Telugu ethuvum theriyathu poda”. And in the back drop of the poster has some ghost wearing mask, it also has the reference of corona vaccine. Let’s wait and watch will the movie will be released in OTT platform or in the big screen.