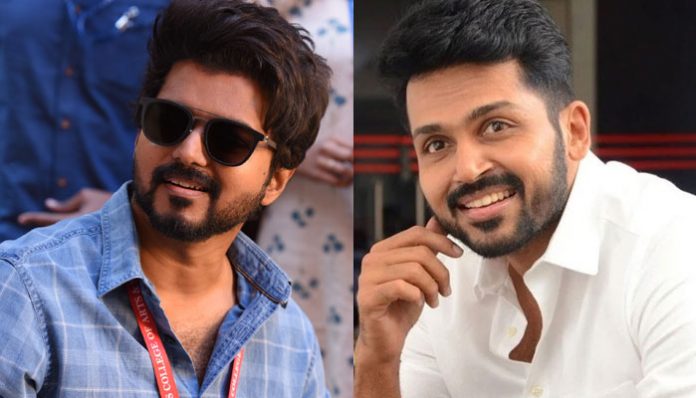 Due to COVID-19 pandemic many film producers are facing financial loss. To overcome the loss, most of the films are being released in OTT and PPV platforms. In this situation Vijay’s new movie Master is planned for theater release for the coming Pongal festival season.

Master is an Action thriller of Vijay with Malavika Mohanan as the female lead. Vijay Sethpathi is playing as antagonist and supported by Shanthanu Bagyaraj, Andrea Jeramiah and many others. Story, Screen play and Direction are by Lokesh Kanagaraj, Produced by Xavier Britto. Music done by Anirudh Ravichander and Cinematography by Sathyan Sooryan. Yuvan Shankar Raja, Vijay and Anirudh have sung in this movie. Fans are having lot of expectations.

In the same time Actor Karthi’s new movie Sultan is also ready for release on Pongal in theatres. This is a Romance movie and Reshmika Mandanna as the female lead.  Supported by Ponnambalam, Yogi Babu and others. Directed by Bakkiyaraj Kannan and produced by S R Prabhu. Last year on Deepavali also Karthi’s Kaithi and Vijay’s Bigil clashed in theatres but both were hits. Coincidence is that Master Director Lokesh Kanagaraj was the director of Kaithi also.