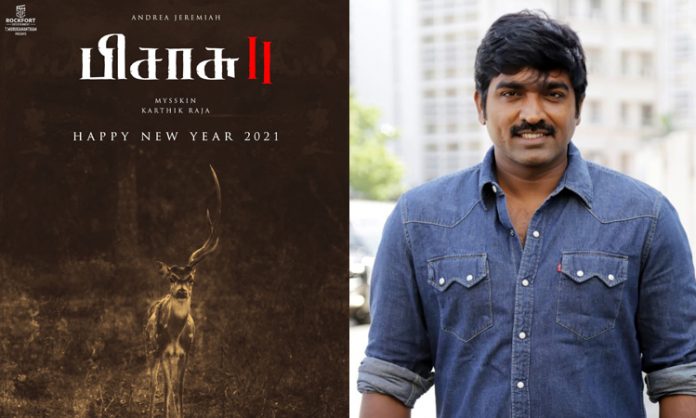 Actor Vijay Sethupathi is playing a guest role in the thriller movie ‘Pisasu 2’, directed by Mysskin.

After the psychological thriller ‘Psycho’, starring Udhayanidhi Stalin, Mysskin was to join Vishal for the sequel of their last outing ‘Thupparivaalan’, released in 2017. But due to some financial issues, Myyskin walked away and Vishal took over the direction of ‘Thupparivaalan 2’.

And the question arose regarding Mysskin’s next project and he announced the sequel of his earlier horror movie ‘Pisasu’, released in 2014. ‘Pisasu’ had received highly positive reviews and emerged as one of the most profitable movies of the year and the sequel was announced in 2020.

Rajkumar Pitchumani, who played a key role in ‘Pisasu’ is playing a pivot role in ‘Pisasu 2’ and Andrea Jeremiah is playing the lead role. Composer Karthik Raja is scoring the music and Santhakumar is handling the camera. And the movie is bank rolled by Muruganantham under his banner ‘Rock Fort Entertainment’.

The filming of ‘Pisasu 2’ is presently going on in Dindigul and Vijay Sethupathy, who is playing an important but guest role, has moved to Dindigul to join the team.

Vijay Sethpathi is expected to join director Pon Ram, for their new movie, after returning from Dindigul.