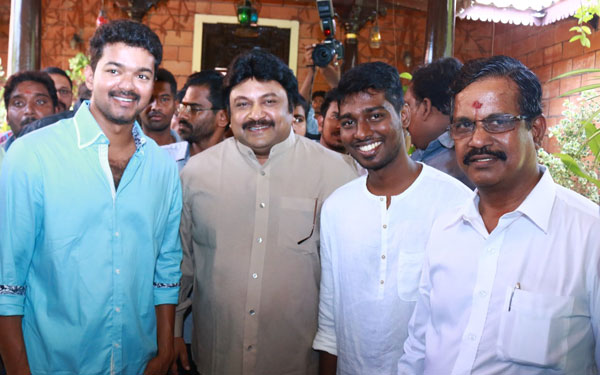 Vijay’s latest flick Puli is yet to be released and the films trailers and teasers are receiving a huge response from the fans.

In the meanwhile, vijay silently started acting in his new film directed by Atlee. The high light is that few portion of the movie is getting filmed in the legendry actor Sivaji Ganesan’s house “Annai Illam” and the actor’s son Prabhu is playing the role of Vijay’s father in ‘Vijay 59’. Vijay is playing a role of a cop in this movie.

Vijay, Samantha, Amy Jackson, Radhika Sarathkumar, Prabhu, Director J.Mahendran, Motta Rajendran and many others in the star cast. Music by G.V.Prakash and is produced by Kalaipuli.S.Thanu