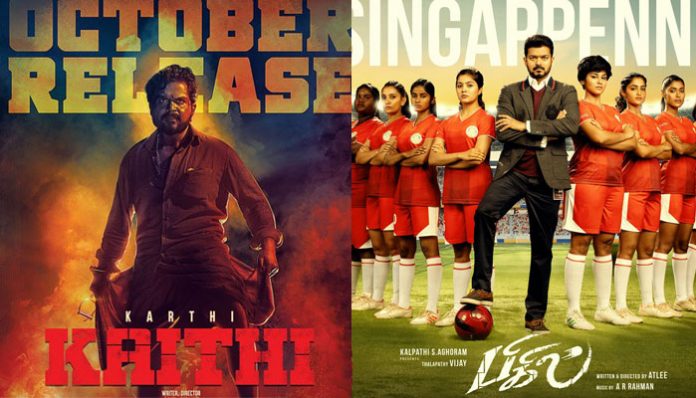 Past two years it was just one movie for Diwali release. But this year it is going to be interesting because we have Vijay‘s Bigil and Karthi’s Kaithi for the Diwali fight.

At first Karthi’s “Kaithi” was plan to be released on the day of Diwali. This movie has been directed by Lokesh Kanagaraj, the director of “Maanagaram”. Kaithi is a full and full action movie with no female leads, and most of the movie was captured at night.

Eight years before Vijay’s Kavalan and Karthi’s Siruthai had their release on same day for Pongal. That time Siruthai was a blockbuster hit against Kavalan. Now, there are huge expectations for both the movies Bigil and Kaithi. Let’s see who wins the war, whether Thalapathy’s Bigil or Karthi’s Kaithi.

Interestingly Thalapathy fans are also eagerly waiting for Karthi’s Kaithi, because Thalapathy 64 is to be directed by Kaithi’s director Lokesh Kanagaraj. So it is going to be a tough fight for this Diwali. Hope both the movies succeed.