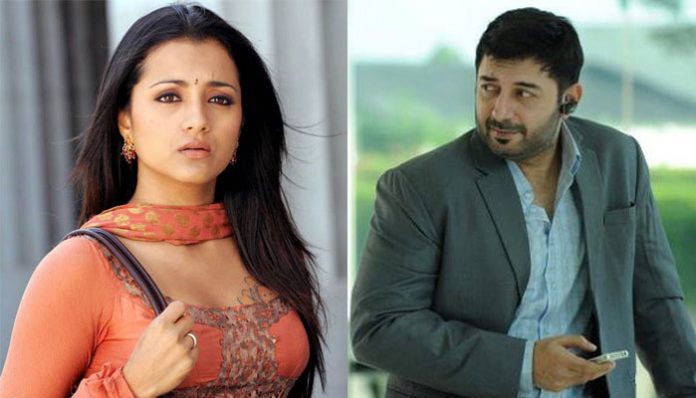 Sathuranga Vettai which was released a couple of years back, was a block buster hit. The movie surprised many by the way it revealed how people a fooled by fraudsters for earning money. The movie had Natty Natrajan, Ishaara Nair, Ponvannan and Ilavarasu in the cast. In H Vinoth’s direction the movie was produced by Manobala.

Now the movie’s sequel Sathuranka Vettai 2 is getting ready. This is going to be bigger than Sathuranka Vettai, Arvind Swami and Trisha are to play the lead characters. Sathuranka Vettai’s director Vinoth is writing the screenplay and the Salim director Niraml Kumar is to direct the movie. This upcoming flick is also to be produced by Manobala.

This sequel is also about some social issues, this movie will reveal how the people are targeted and cheated using the day to day inventions in technology. Actress Trisha has confirmed her existence in the movie through Twitter, she has tweeted that, ‘Super happy 2b on board #sathurangavettai2 produced by my dear friend @manobalam alongside d multi-talented@thearvindswami #racythriller’.