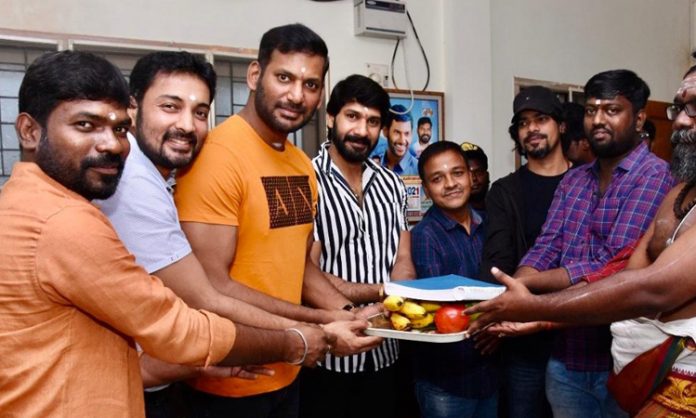 Some of the popular movies like ‘Sandaikozhi’, ‘Thaamirabharani’,  ‘Avan Ivan’, ‘Pandiya Naadu’ and ‘Irumbu Thirai’, were the breakthrough for actor Vishal’s carrier. After ‘Irumbu Thirai’, released in 2018, the movies, ‘Sandakozhi 2’, ‘Ayogya’ and ‘Action’ were not that successful.

Currently Vishal is busy in his upcoming movies, ‘Thupparivaalan 2’, ‘Chakra’ and ‘Enemy’. After director Mysskin stepped out from ‘T 2’, Vishal himself is directing the movie. ‘Chakra’, a spin-off of ‘Irumbu Thirai, is ready for release and the shoots of ‘Enemy’ with his friend Arya, is going on in full swing.

Amidst this, the next movie of Vishal has started with the Pooja on 2nd. The new movie of Vishal is going to be directed by Thu Pa Saravanan, who became famous by the short film, ‘Edhu Thevaiyo Adhuve Dharmam’. The short film has won more than 20 Awards and is a proof of the high talented director who gained experience by assisting many popular directors for 8 years.

The movie of Vishal with the highly talented Thu Pa Saravanan, will definitely be a comeback to Vishal, we can expect. The movie is said to be shot in Tamil and Telugu simultaneously and the cast and crew will be announced soon.