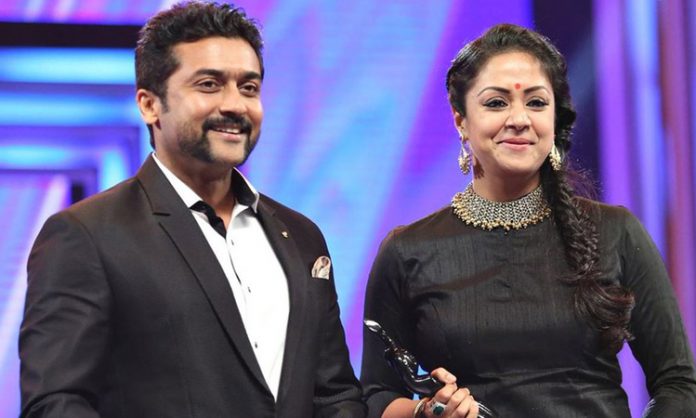 Actor Suriya, who is well known for his dedicated acting, has his super hit movies like, ‘Soorarai Pottru’, ‘ ‘Vaaranam Aayiram’, ‘Ghajini’,  and ‘Pithamagan’.  Jyothika, the actress who won many awards, has her super hits like, ’36 Vayadhinile’, ‘Mozhi’, ‘Chandramukhi’, ‘Poovellam Un Vasam’ and ‘Kushi’.

These two great actors married each other on 11th September 2006 and they had acted together in 7 films like, ‘Poovellam Kettuppar’, ‘Kaakha Kaakha’ and ‘Sillunu Oru Kaadhal’, all before their marriage.

After the marriage, Jyothika completed the committed movies and kept away from acting till 2015. And she reentered the field with ’36 Vayadhinile’, written and directed by Rosshan Andrrews. The film was a commercial success and fetched her the Film fare Critics Award for Best Actress. Following that she acted selectively, with many other actors, but not with her husband Suriya, who is continuing as one of the top actors of the field.

At this situation, Halitha Shameem, who directed the critically acclaimed movies like, ‘Sillu Karupatti’ and ‘Aelay’, says that she is making a story ready for the star couple. Also she had met the couple and got their approval for the project. She assures that she will complete the script at the earliest and will bring the couple together on the screen, soon.