Soorarai Pottru is more eagerly awaited due to Madhavan 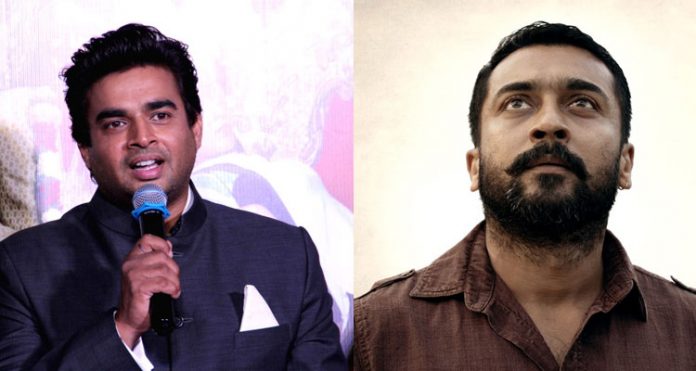 Surya’s  Soorarai Pottru is an Action Drama and its production started in the middle of 2018. Aparna Balamurali joined with Surya for the first time costarred by Mohan Babu, Paresh Rawal, Urvashi, Karunas and many other supporting actors. The movie is written and directed by Sudha Kongara and produced by Surya’s ‘2 D Entaertainment’ and Guneet Monga’s ‘Sikhya Entertainment’ at a budget of 15 crores. Music is by G V Prakash Kumar and Cinematography is by Niketh Bommireddy.

Tough the shooting was completed by September 2019, the release was delayed due to the post production activities and further by the Corona virus pandemic and now it is releasing in the Amazon Prime Video at the end of this month.

The new look of Surya, the involvement of Hollywood Stuntman Greg Powell in choreographing the actions, presence of bigwigs like Mohan Babu, Paresh Rawal and Urvashi, schedule in Chandigarh, are increasing the expectations of the audience. During a recent interaction with fans on twitter, a fan has asked Actor Madhavan about the movie Soorarai Pottru, for which the actor commented, ‘Mind blowing’. This comment of the Actor has further increased the expectations about the movie. The movie is awaited very eagerly than before.