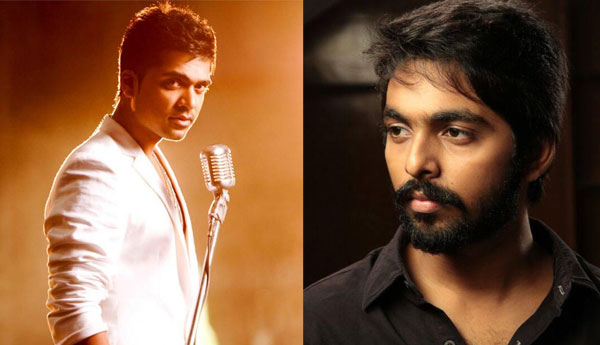 G V Prakash the music star turned actor’s next upcoming movie is ‘Bruce Lee’. The recent release of him ‘Yenakku Innoru Per Irukku’ is going well on theaters as it has attracted more youngsters with its practical move. Now his next movie is on the finishing stage.

Bruce Lee is being directed by Prasanth pandiraj and produced by Kenanya films. Kriti Kharbanda, the very famous Kannada actress is pairing up with G V Prakash. The cast also includes Rajendran, Ba Saravanan, Ramdoss, Anandaraj and Mansoor Ali Khan.  And the sound tracks of this movie are composed by G V Prakash himself. Shankar is handling the cinematography and D.Manoj Gyann is working on editing.

Recently a sound track of this movie was recorded by G V Prakash with STR, which will be a kuthu number. This is the first time, Simbu is singing in G V Prakash’s composition.  The ‘Bruce Lee’ team is very happy about the outcome of this song sung by Simbu and they hope this song will make he hit of this year.