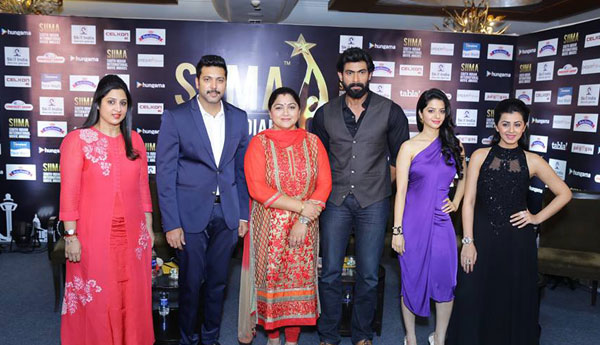 The SIIMA Awards 2016 (South Indian International Movie Awards) is scheduled on 30th June and 1st July at Singapore. This SIIMA Awards recognises the best film, actor – actress and technicians in the South Indian film industry. This SIIMA awards was launched in 2012 and this is the fifth version of the award function.

The curtain raiser of SIIMA Awards 2016 was held in Chennai last week in which Kushboo, Jayam Ravi, Raana Dagupaty, Vaedika and Nikki Galrani took part. Kushboo said that, SIIMA Awards is a very prestigious award in which there are separate jury for each language movie.

Thus this SIIMA Awards is surely going to be a visual treat to the cinema fans, as all artists from south Indian Industry is going to appear at the same time also the stunning performances from actor – actress in the industry will be a visual treat. As in last year Sun TV has got the telecast rights of this event.