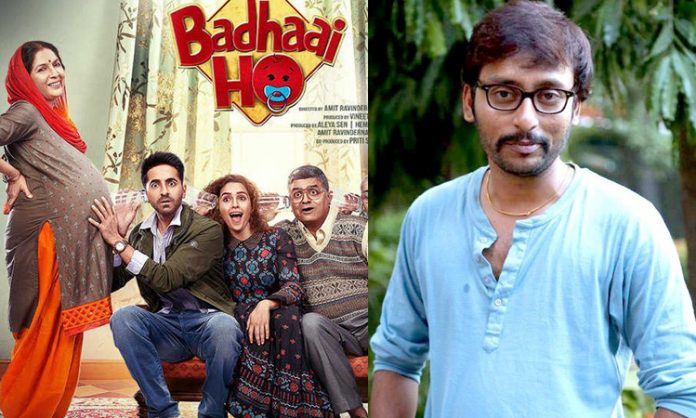 The 2018 Hindi blockbuster, ‘Badhaai Ho’ is remade in Tamil with RJ Balaji, directing and playing the lead.

The movie was about a middle aged couple, Neena Gupta and Gajraj Rao, having grownup sons and the humiliations and the strange situations arising when Neena gets pregnant unexpectedly. The movie was critically acclaimed and was a blockbuster, grossing over 220 crores.

The remake right of the movie was bought long back by Boney Kapoor, for all the four South Indian languages and the Tamil remake is confirmed now. RJ Balaji, who entertained us with his directorial debut, ‘Mookuthi Amman’, during the last Deepavali, is reprising the role of Ayshmann Khurrana. Balaji directed ‘Mookuthi Amman’ along with NJ Saravanan and this will be his first independent directorial.

It is also said that RJ Balaji had successfully negotiated with director K Bhagyaraj for the title, ‘Veetla Visheshanga’ and the remake is likely to bear the same title as the 1994 movie of Bhagyaraj.

The rest of the cast and crew selection is on and the official announcement on this is expected soon, from the producer Boney Kapoor.