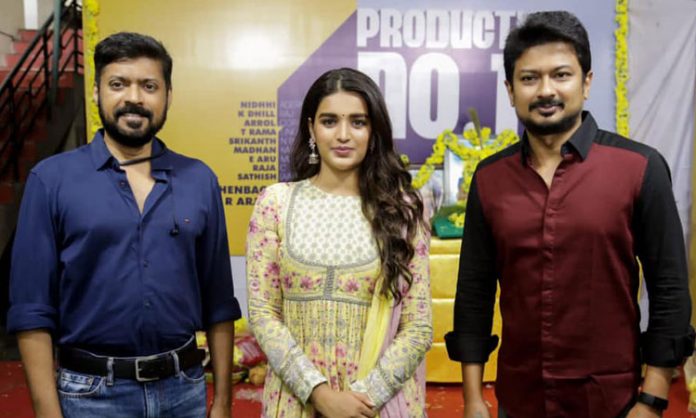 The 14th production of the ‘Red Giant Movies’ of Udhayanidhi Stalin started rolling on Friday, announced by Udhayanidhi on his Twitter page. The Actor, Producer who is selective for good stories is joining with Magizh Thirumeni who directed the 2019 blockbuster ‘Thadam’.

The ‘Red Giant Movies’ produced more than a dozen movies, their last production ‘Kanne Kalaimaane’ received average reviews. It may be a comeback for the Red Giant by joining hands with Magizh who received positive reviews for all the four movies he directed.

The gorgeous actress Nidhhi Agerwal, who won the Zee Cine Award for Best Female Debut, for her first appearance in the Hindi film, ‘Munna Michael’, is playing the lead role opposite to Udhaya in this new movie.

Udhayanidhi was also appreciated for his acting in his last release ‘Psycho’. The combination of all this, increases the expectation on the movie.

Composer Arol Karoli is scoring the music for the film and the rest of the cast and crew will be announced soon.