The trailer of Soorarai Pottru announces the movie’s release! 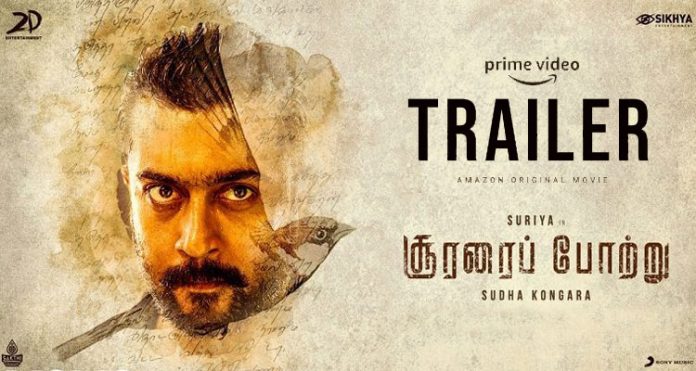 The long awaited release date of Suriya’s ‘Soorarai Pottru’ is announced this week along with the trailer of the movie. And the release is on 12th November, just before the Festival of Lights, Diwali. After completion of the filming by September 2019, the release was initially announced to be on the 20th of December 2019.

Due to various reasons, the release date of ‘Soorarai Pottru’ got postponed four times and after the film’s Censor Report was revealed in August 2020, it was announced to be released on OTT by 30th October, disappointing the Fans who were expecting a theatrical release.

And when the release was postponed for the fifth time, testing the patience of his fans, Suriya came out on the 23rd of this month with a statement, explaining the reason and expressing his regrets. Now the attractive trailer of the Action Drama, states at the end, very clearly, that the film will be available on the Amazon Prime Videos before Diwali.

The Trailer gives the glimpses of the vigorous actions of the 45 year old and the theme of the movie in a nutshell, ‘the villager who dared to dream the impossible’. The trailer is appreciated widely on the media and is raising the eagerness of the fans.