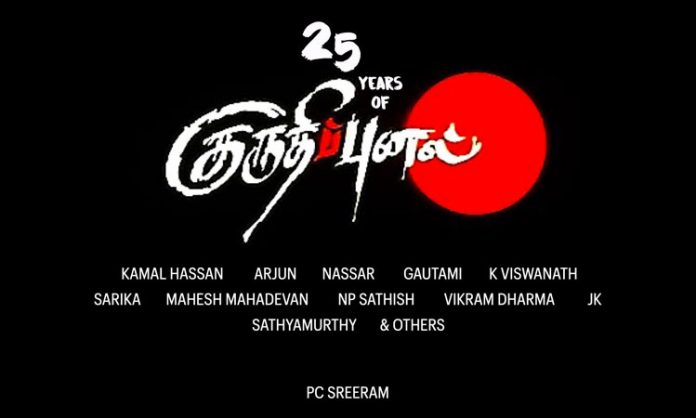 Released 25 years back on 23.10.1995, ‘Kuruthippunal’ was the first ever movie of its kind in the Indian Cinemas. The movie was the second Directorial of the National Film Award winner, Cinematographer, P C Sreeram, with Kamal Haasan in the lead role.

Making of ‘Kuruthippunal’ rose in the minds of both Sreeram and Kamal, after they were invited by Veteran film maker, Govind Nihalani, for the screening of his Hindi film ‘Drohkaal’, at Mumbai, in 1994. Actually, ‘Kurithippunal’ was the remake of Govind Nihalani’s ‘Drohkaal’ but it came out with such a perfection that it was called, ‘a remake that is Original’ by the original film’s maker, when he was invited for the premiere.

The movie was submitted to the Oscars as the official entry of our Country in 1996 but missed the nomination. But the film got overwhelming response and critically acclaimed as, ‘American Action movie made in Tamil’. It really made the people to believe that the Indians also can make movies in Hollywood standard.

All the credits due to the excellent performance of Kamal and Arjun, the magical cinematography of Sreeram, the splendid background score by debutant Composer Mahesh, whose work was acclaimed as ‘the silence that speaks’ and the bold and perfect presentation of the concept by the Director, P C Sreeram.