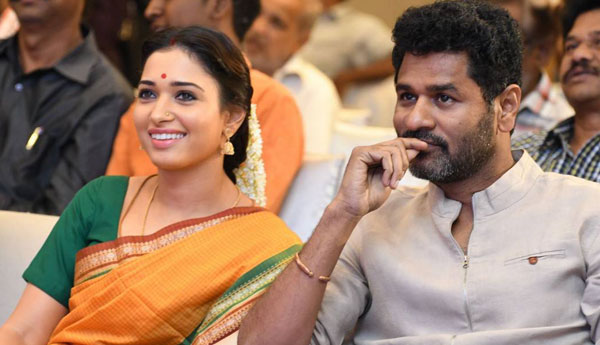 Director Vijay is doing his next movie with Prabhu deva and Tamannah in the lead roles. This is featured as a horror film and it’s said that Tamannah will be playing dual roles of two sisters for this movie. In which one of the sisters is an actress and the other is a devil.

The movie is made in three languages, in Tamil it’s titled as ‘Devi’, in Hindi ‘Devil’ and in Telugu as ‘Abhinetri’. Seeing the dance rehearsal video for the movie it seems that, Tamannah has given dance performance equal to Prabhu deva.

The actors have revealed a video in twitter which was shot during the dance rehearsals of the movie. In which Tamannah is rehearsing with the India’s dancing icon Prabhu deva and other two videos where Tamannah alone is rehearsing. Though she is a good dancer it looks as she has worked more to level up with Prabhu deva.