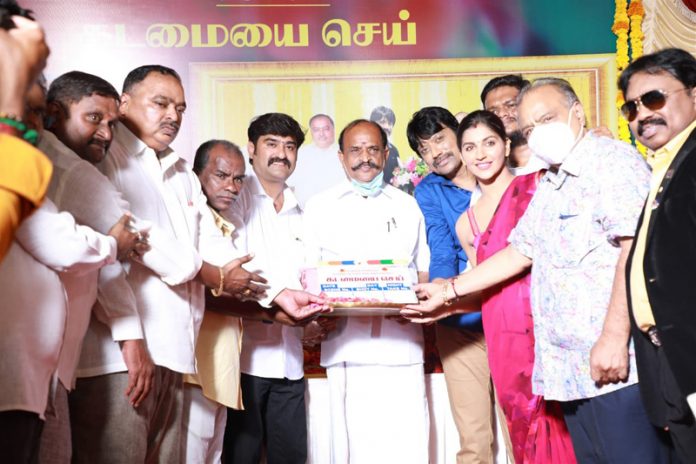 The new movie of SJ Suryah with Yashika Aannand is inaugurated with the Pooja on the first of this month.

SJ Suryah has completed his parts in ‘Nenjam Marappathillai’, Maanadu’ and ‘Bommai’ and is said to play the antagonist to Sivakarthikeyan in ‘Don’. Currently he is playing the lead role in a new movie which started with the Pooja on 1st February 2021.

The movie is named ‘Kadamaiyai Sei’ and Yashika Aannand is pairing SJ Suryah in the lead role. The film is directed by ‘Muthina Kathirika’ fame Venkat Ragavan and produced by TR Ramesh and Zakir Hussain under the banners ‘Ganesh Entertainments’ and ‘Nahaar Films’.

Motta Rajendran, Charles Vinoth, Rajasimman, Vincent Ashokan and many others are in the supporting roles. Cinematography is by Vinoth Rathnasamy and Arun Raj is the music director. MG Murugan is doing the art direction, Pradeep Dinesh is the stunt choreographer and NB Srikanth is editing the movie.

The State Minister Kadamboor  Raju, participated in the ceremony and inaugurated the Pooja of the movie.