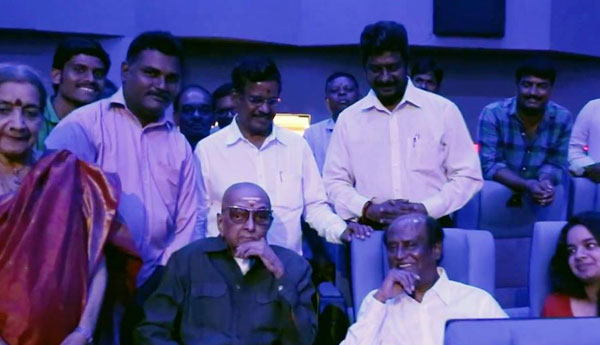 The recently released Kabali of Super Star is running successfully on theatres though it got mixed reviews from the critics. Also by collections it has made records within a week of its release.

The movie had Radhika Apte, Nassar, Kalaiyarasan Harikrishnan, Kishore Jayaram, Dhansika, Riythvika, Dinesh Ravi and Winston Chao in the cast. Rajinikanth who was in US during the release of Kabali watched a premier show there, after he returned home he wrote a thanking letter to all behind the success of the move.

Recently Super Star has watched another premier show in the Four Frames Theater with his close friend Cho Ramasamy, who is a veteran actor and journalist, the producer Thanu and music director Santhosh Narayanan of the movie were also with them. Cho Ramasamy liked the movie and appreciated the Kabali team. Also he said that he was really happy to watch a different version of Rajinikanth in this movie.