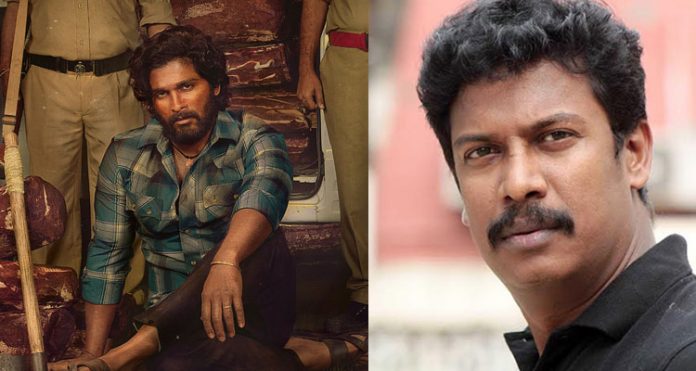 ‘Pushpa’ is the new Telugu Action Thriller of Director Sukumar, produced by the Mythri Movi Makers along with the Muttamsetty Media, starring Allu Arjun and Rashmika Mandanna in the lead roles and supported by Dhananjay, Jegapathi Babu, Prakash Raj and many others. The music of the movie is composed by Devi Sri Prasad and Cinematography by Miroslaw Kuba Brozek.

The movie is said to be based on the news of 20 Tamil wood cutters shot dead by A P Police, 5 years back, for felling Red sanders. Initially, Director Sukumar planned the project with Mahesh Babu, who stepped out due to some difference. Later, the project started with the 5 times Film fare award winner, Allu Arjun who was the hero of Sukumar’s debut directorial.

The versatile Tamil actor Vijay Sethupathy was to do one of the main Villain roles, who withdrew from the project, as the story was said to be against Tamils. After few more actors, proposed for the role, also withdrew for various reasons, Director Samuthirakani is doing the role now.

We can expect, Director Samuthirakani, the National Award winner, will do full justice for the role.