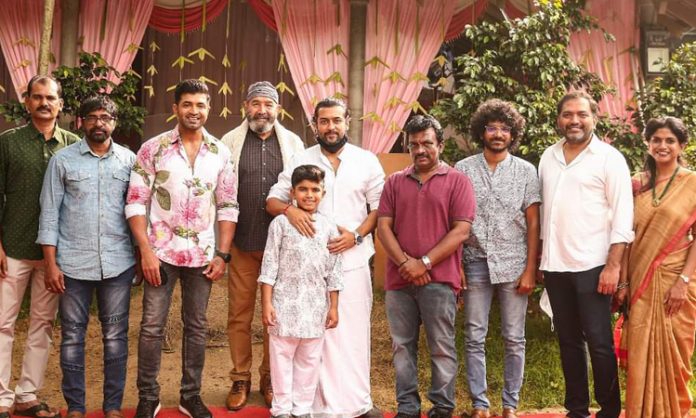 Suriya’s own production and distribution company is the ‘2D Entertainment’, which started at 2015, with critically acclaimed movie, ’36 vayadhinile’ starring Jyothika with Rahman. Following this, ‘2D Entertainment’, bankrolled many popular movies, including ‘Soorarai Pottru’, which created record in Google search and is one of the ten Indian movies to be screened at the 78th Golden Globe Awards.

On 14 december, the new movie, produced by ‘2D Entertainment’ is announced along with the Pooja. Popular actor Arun Vijay’s son, Master Arnav Vijay, is debuting in this movie in a key role. The movie, depicting the emotional bonding between a small boy and his pet puppy, is directed by Sarov Shanmugam.

Many more kids are also taking part in the kids-centric movie, along with Arnav and the complete movie is to be filmed in the backdrops of Ooty. Regarding the movie, director Sarov Shanmugam says that ‘2D Entertainment’ presents always movies with good themes and enjoyable by family audience and this movie also will be a beautiful one which can be enjoyed by worldwide family audience.

The proud dad, Arun Vijay has tweeted that he is extremely happy of his son being introduced by Suriya and stated that he is also appearing in the movie in a cameo role.