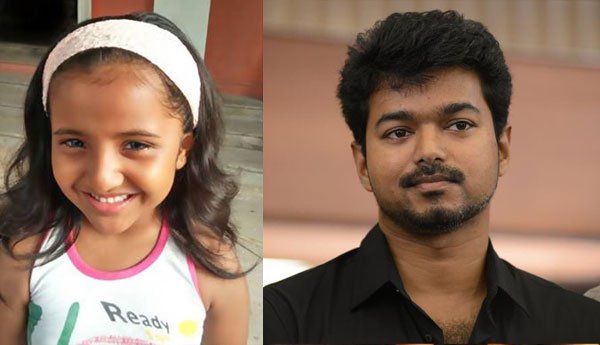 Actor Vijay’s recent release ‘Their’ is a huge block buster hit, which was directed by Atlee. The main factor behind the success of this film is the child Artist baby Nainika, daughter of Meena. The scene involving Vijay and Nainika was a big plus to the movie.

Now Vijay 60 directed by Bharathan also has a child artist Monica Shiva. Keerthy Suresh is pairing up with Vijay in this movie.  And there are many scenes involving Vijay and Monica. But her role in the movie is kept secret by the team.

With her cuteness and innocence the Baby Monica Shiva has won all hearts in the shooting spot. Hope the magic of their will work in this movie also. Other than Vijay 60 Monica is having hand full of movie. She is acting in Stunt choreographer Dhilip Subbarayan’s ‘Sangu Chakkaram’ and ‘Kattappaavai Kaanom’ starred by Sibiraj and Aishwarya Rajesh. Hope this cute little girl will go places in future.