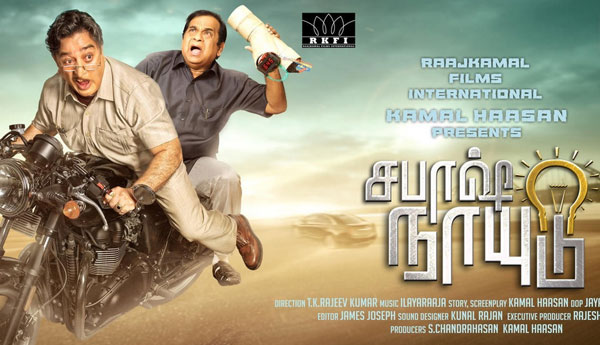 Sabaash Naidu is an upcoming movie starring Kamal Hassan, Shruti Hassan and Ramya Krishnan. Kamal’s friend TK Rajeev Kumar is directing the movie and produced by Raaj Kamal Films International and Lyca Productions of Kamal Haasan Chandra Haasan and A. Subaskaran. Also this film is made in Telugu and Hindi.

Most part of the movie was planned to shoot in USA and the filming is going on in Los Angeles. But suddenly the director Rajeev Kumar fell ill. It was diagnosed as Lyme disease, an infection widespread in Europe. As he is undergoing treatment, Kamal Hassan is temporarily directing the movie until Rajeev Kumar gets well.

Kamal Hassan doing as a standby director to avoid delay in the project as the shoot in Los Angeles is scheduled only for three months.

Akshara Hassan, younger daughter of Kamal is working assistant director in this film. Thus Kamal Hassan, Shruti Hassan and Akshara Hassan are joining for this movie. In this movie Kamal Hassan is playing Balram Naidu, a famous role in the movie Dasavatharam and Shruti Hassan is playing his daughter. Ilaiyaraja is scoring the music. The filming started by May and the team have planned to release the movie on 1st December.