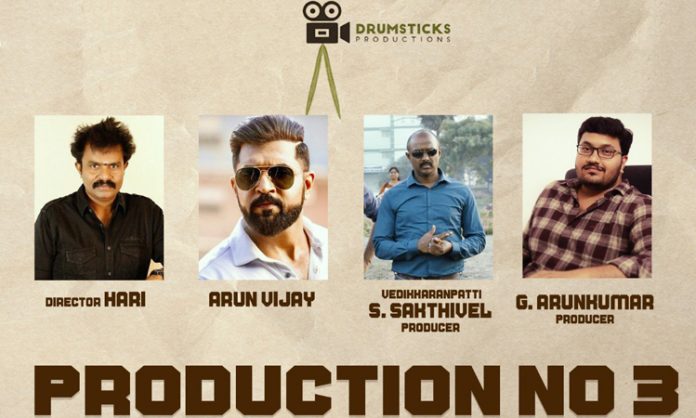 Director Hari is one of the successful directors of the South, who helmed the popular movies like, ‘Saamy’, ‘Thaamirabharani’, ‘Singam’ and ‘Singam II’.

His last release was ‘Saamy Square’, released in September 2018, which was a sequel of his 2003 released blockbuster, ‘Saamy’, starring Vikram.  The movie was produced by Shibu Thameens with a handsome budget of 70 crore, but didn’t do well.

After ‘Saamy Square’ Hari was committed for a movie under the production of Gnanavelraja, starring Suriya. The movie was postponed after the preparatory works which lasted for long time. The reason was said to be some differences of opinion between the actor and the director.

Following this, we got news that, Hari is directing a movie of Arun Vijay, but not announced officially. The authenticated announcement is made on 14th of December, by the ‘Drumsticks Productions’, in their official twitter page.

The production Company has tweeted that, on behalf of Drumsticks Productions, S Sakthivel is producing the new film of Arun Vijay, directed by Hari. This will be the most expensive project of Arun Vijay’s carrier. The movie will be on floors in March 2021 and planned to be released in August 2021. More details on the movie will be published soon.