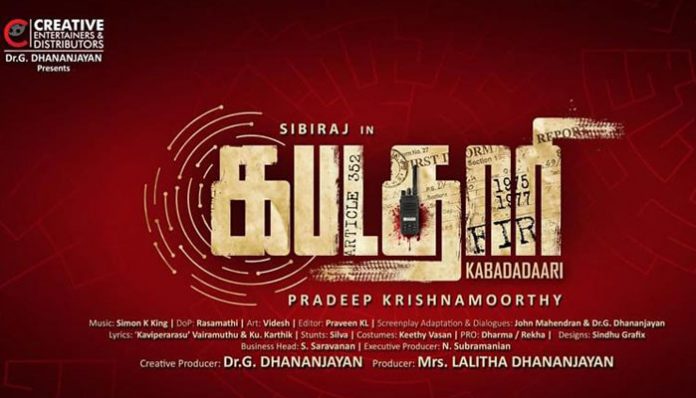 Actor Sibiraj is now doing three movies simultaneously Ranga, Walter and Maayon, after these movies Sibiraj has been committed for another project named as “Kabadadaari”. This is a remake of Kannada movie “Kavaludaari”. In this movie he plays a conman role, already the shooting of the movie is in process.

The movie is directed by Pradeep Krishamoorthy, who previously worked with Sibiraj for the film Sathya. Director has done small changes in the script from the original version for Tamil audience. Actor Sibiraj has completely changed his looks for this movie.

The film features Nandita Swetha as a journalist, Nasser, Sathish, Sampath Raj and Jayaprakash are also palying some major roles. The music is scored by Simon K King, camera is handled by Rasamathi, editing by Praveen KL, Stunt by Silva, Art direction by Videsh, Dialogues by John Mahendran and G Dhananjayan. And the movie is produced by G Dhananjayan and Lalitha Dhananjayan under the banner  Creative Entertainers. The movie is expected to be released in March 2020.