Karthik Subbaraj, young director who has given two hit movies ‘Pizza’ and ‘Jigirthanda’, has come out with his third movie ‘Iraivi‘, which is a feminism based movie. Though the subject is an usual one Karthik Subbaraj has done this in his own style. Also each and every technician and actor has done an amazing job, even actors who appear in a single scene gets registered. The story revolves around three women’s struggle in a male dominated society.

Vijay Sethupathi perfectly fits into the role Michel, but there is nothing new in his characterization and way of acting, its staling, so its time for him to bring a change. Bobby Simha’s performance is outstanding, it seems that only Karthick Subbaraj knows the magic of extracting the best from Bobby Simha. More than any one in the movie S J Suryah has more scope to perform, and he has well utilized that. Despite he has acted in many movies, only this movie has revealed a phenomenal actor in S J Suryah. He scores in every emotional scenes, especially in the scene he asks sorry to the producer. Kamalini Mukarjee and Anjali has done full justice to their roles as women who lost life because of the men in their life. But Pooja Devariya is the lady who has done a bold role, also her role is well characterized by the director. Each dialogue and scene written for these ladies, some way relates to the woman in our life. Vadivukarasi, Radha Ravi, Seenu Mohan and Vijay Murugan have done their parts well. Karunagaran and Kali Venkat might have been utilized more.

The cinematography of Sivakumar Vijayan and art direction of Vijay Murugan helps us to travel with the movie. The editing work of Vivek Harshan is remarkable. Santhosh Narayanan has worked well in BGM, but the songs are not that good, also the imposing of songs into the movie is annoying. More than anything the dialogues of the movie is a great plus, that it strongly conveys feminism, the specialty is dialogues about feminism being delivered by a man.

The experimental approach of the director and boldness of the producer in supporting such subject is really appreciable. The screenplay may be technically good, but the question is whether it satisfies the general audience or not. The movie says that, for a woman to be liberal, the first and foremost thing is that she should feel the liberty inside her.

The message is conveyed effectively and boldly. 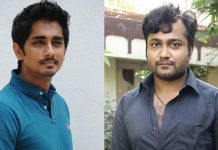 Siddharth and Bobby Simha in Mollywood